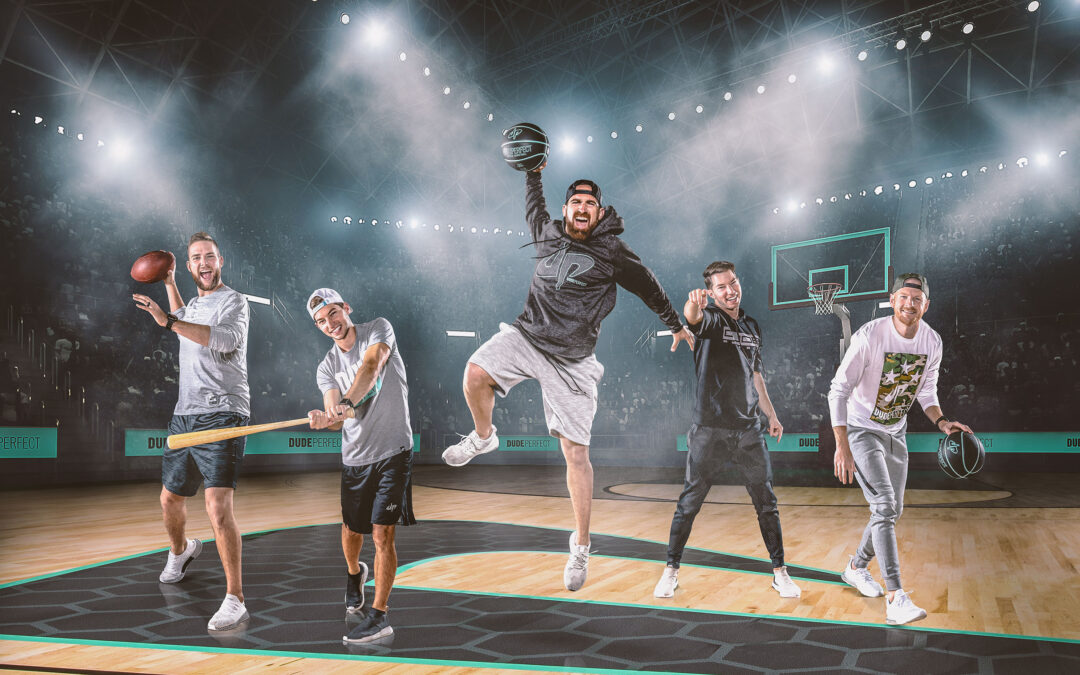 Now we’re headin’ on to overtime

Yes, those are the lyrics to the intro song for Dude Perfect’s Overtime videos on YouTube. If at this point you have no idea what Dude Perfect is, then you probably don’t have children, don’t pay attention to YouTube, and are behind the zeitgeist of the age.

With more than 50.8 million subscribers to the Dude Perfect YouTube channel, the Dude Perfect fellows are some of the top internet stars in the world. What started as videos of five friends goofing around with trick basketball shots in their backyard in College Station, TX became… something much bigger… much, much, much bigger.

Dude Perfect has the YouTube video channel. Dude Perfect has merchandise. Companies regularly sponsor the videos. The guys have had their own cable TV series. In summer 2019, the Dude Perfect guys did a national live tour in arenas across the United States playing to sold-out audiences. A documentary about the past decade of the Dude Perfect journey is about to be released (May 2020). Dude Perfect even sells baked beans. Really.

Basketball trick shots… really. That’s how it started. Five guys trying to one-up each other with crazy basketball trick shots as they finished their degree programs at Texas A&M University. A video on YouTube went viral. Suddenly, they were being interviewed on national TV shows. The guys all got married over the last decade. There is a second generation of little Dude Perfects growing, and some of the kids have been slipped into recent videos. The guys are still doing crazy trick shots, but they also have competitions with each other based on other crazy ideas. In the Overtime videos, they even play a game of chance called “Wheel Unfortunate” by which one of the guys is condemned to endure an unfortunate prize, like having one’s eyebrows shaved off or flying to another state for no reason and immediately flying back.

If you are reading this and thinking “Wow, that’s silly,” then you’re right. It is silly. It’s silly fun. It’s five guys doing things that kids (and big kids) think about doing but don’t usually get to do. They have fun. They kid each other mercilessly. They dream up things to do that nobody else has done, and they set “Absurd Recurds” by breaking official Guinness World Records for things like the number of bounces of a ball between the heads of two people in 30 seconds.

Why would I be spending this time writing about Dude Perfect today? Because the Dude Perfect story is a great example of strategic thinking that has resulted in the creation of value that is rare, has mitigated eroding factors to this point, put in great enabling factors to support the value creation (like a dream facility for engaging in sport-oriented activities), and had a decade of longevity in the process.

Value creation and rareness are at the heart of Dude Perfect. People enjoy watching the five guys just be themselves. The five of them have a socially complex set of relationships within the group that others don’t have. They have personal chemistry with each other and with the kids and adults who watch them. That socially complex personal chemistry that has bubbled up from Cory, Coby, Cody, Tyler, and Garrett is the secret sauce that has made the silly stunts and ongoing videos capture millions of regular viewers. Clearly, they are creating value and lots of it.

Value is a subjective thing. Something as intangible as the way Dude Perfect makes people feel is valuable, and in this case, very valuable and rare. You can find many other videos of trick shots on YouTube. They aren’t from Dude Perfect, though.

When you are thinking about finding new ways to bring value into the world, don’t forget that something as intangible as the way you make people feel can be a deciding factor in how much value you create. Don’t forget that the relationships you develop with team members and with customers, vendors, the community at large, etc. might be extremely important components of how much value you can create. Don’t forget that there is only one you with a certain set of circumstances that nobody else in the world has. You might be positioned to create enormous value that nobody else has the capability to touch. That’s true for a company of people, too. It’s possible that the relationships within the company (or not-for-profit organization) and between the company and the rest of the world are part of the value proposition.

I cannot help myself. Every time I watch a Dude Perfect video, I smile at something that happens and at the sheer silliness of it all. Then, I think… what amazing value creation with rareness. The guys have brought this to life, all the while dodging the eroding factors that I can imagine have come along, and being smart about developing great enabling factors…and all that in the decade since they were a group of guys wandering the campus of Texas A&M and enjoying sudden attention from the national media.

Dude Perfect… your V-REEL™ journey has been just about perfect.